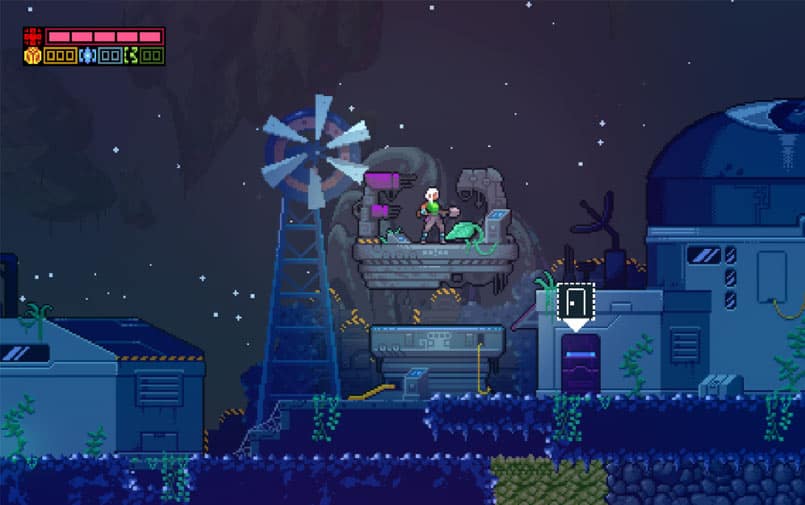 On December 29, 2018, Noel Berry released a Medium post  that announced the cancelation of Skytorn, a long-awaited Metroidvania style game. This procedurally generated platformer began development in 2012 and has overgone many changes in that time, culminating in its cancelation at the end of 2018.

Skytorn was a highly anticipated platformer in a 64-bit style, set in a fallen world, with machinery interwoven around natural ruins to create an eerie world. What is left of earth’s population is contained to airships, and you work your way through uncharted islands floating in the sky. Even just a quick watch of the game trailer  evokes a sense of nostalgia and adventure.

The team is Berry as programmer and technical artist, Amora Bettany working on character design, Pedro Medeiros as programmer and gameplay artist, Ben Prunty for music, and Power Up Audio, for sound design. They began working together from the very beginning, in 2012, following Berry’s decision to drop out of college. They released the 2018 hit, Celeste, which had started as a side project while working on Skytorn. After releasing such a well-renowned game, the anticipation for their original project grew.

Berry attributes this decision to cancel the project as the team never discovering what the game “really was,” getting caught up in the design and gameplay, but not feeling like they were able to marry these elements together properly. The development of the game was plagued with gameplay issues.

But we kept working on it, polishing it, adding art and content, to what was ultimately a broken core. I thought that we could keep working on it and be able to restructure the gameplay as we went, as we really figured it out,” Berry said in his post, “But at some point, you have all these systems and then changing anything at the lower level becomes a lot of work.

After taking a break from the project to focus on Celeste, the team returned to Skytorn following the release in May of 2018. When the returned, Berry says about the project that

we were faced with the tough decision of reworking Skytorn to its core, or beginning work on something brand new, taking in all these lessons.

The decision was ultimately made for the project to be dropped in favor of starting over.

While the group is staying together and working on a project in the new year, they have yet to release information on their latest projects.

As much as we all love Skytorn and how much it’s meant to us over the last several years, we’re excited for new things and new projects,

If Celeste is any indicator of their potential, then this team has a lot to offer the gaming community.