Assassin’s Creed is a franchise that continually evolves throughout the ages, just as its games time-travel to spectacular eras and emulate plotlines of historical relevance. The beloved franchise, which as of now has reached a milestone of ten titles, continues to thrive to this day. Furthermore, it would seem as though there is no end in sight for Assassin’s Creed and the Developers Ubisoft, who has garnered somewhat of a reputation in recent years for quick but quality releases. Thankfully, “Origins” is no exception to this rule. So then, how does Assassin’s Creed Origins shape up?

The Assassins Creed saga set a precedent for how the gaming world perceives role-playing games. However, perhaps the series began to wane mid-way through its life-span, but now many, if not all those demons have been indeed put to rest. The problem, at least initially, was seemingly one of monotony. While “Creed” two supplied the perfect balance of variety and substance, successive games perhaps suffered from a lack of inventiveness in the creativity department. Hence, the repetitive nature of its mission system.

In contrast, the team behind the series brought life and injected a splash of color back into those deflated cheeks. What with the success of Black Flag and Syndicate, both of which have reinvigorated the franchise. What each of these games has in common is a stellar period to prop it up. Think about it for a sec; number two had The Renaissance era of Italy and the age of enlightenment. Additionally, Black Flag takes place in the 18th century during the golden period of piracy. Last but by no means least we have Syndicate, set amidst the backdrop of the Industrial Revolution.

So then, it is only right that the next great game in this illustrious saga has an era, and identity of equal importance. Thankfully, this is where Assassin’s Creed Origins comes into its own. Welcome one and all to the Elysian Kingdom of Egypt. Finally, we have a game that makes use of all that rich culture, stunning art, and visceral imagery.

Having played many open-world games, I am happy to go on record and say that Assassin’s Creed Origins is the best looking to date. Opinion though it may be, that is quite an accolade, especially if you consider the pedigree of other genre greats, such as The Witcher 3: Wild Hunt. The minute you set foot in Egypt, the visuals sweep you clean off your feet; it’s like a soaring carpet ride for the senses. Shifting sandbanks shimmer in the light of the sun and palm trees rich in color, sway elegantly in the subtle breeze. All the while, a rocky canyon steeped in detail, shows off its imposing stature. 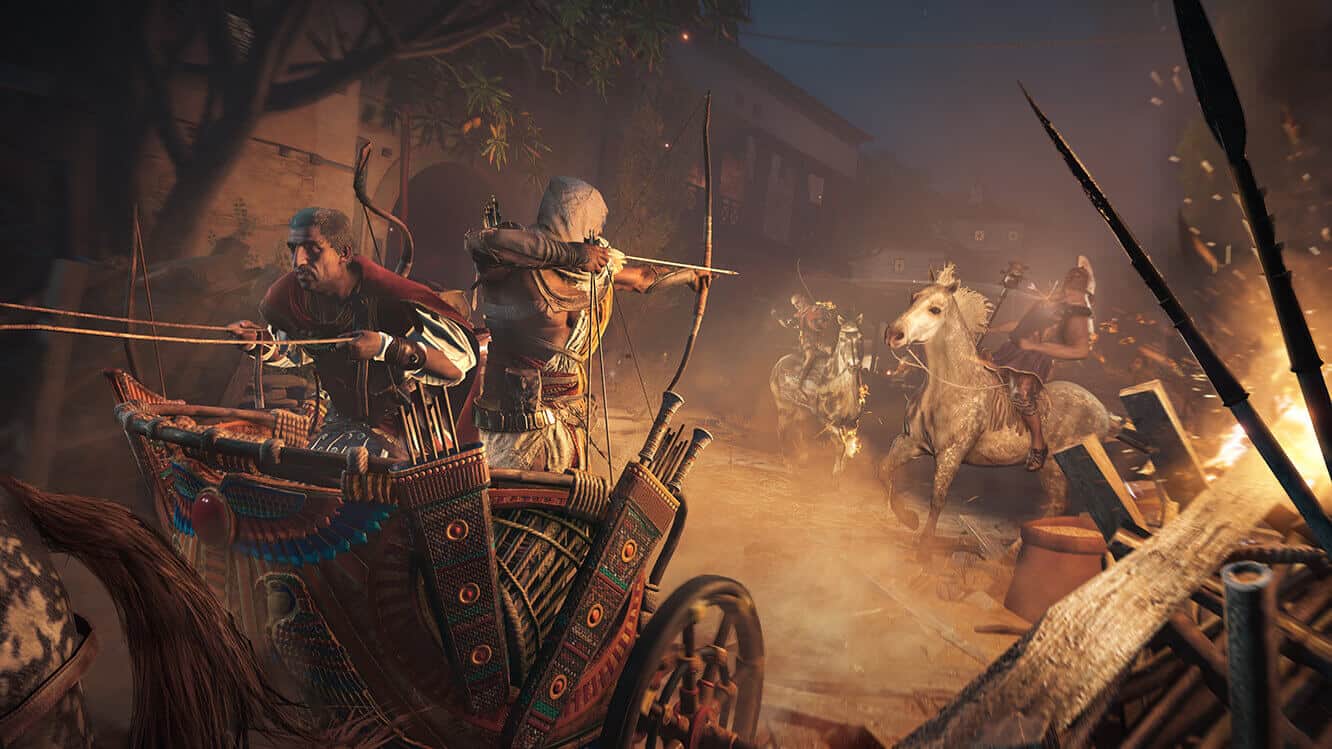 They say that beauty in the eyes of the observer. That statement is more than right here. Key to this is the attention to detail, which, must be said, is something to behold. From the dusty, stone wall interiors, to the market stools and pottery littered across the plains, each reflects this period of Egyptian rein with great detail. Factor in all those shiny relics, runes and artifacts, and the City of Alexandria rises from the grave, at least for a modern-day audience. And it’s one of great visual splendor. Assassins Creed Origins has got it all.

The Story to Assassin’s Creed Origins is one of love, betrayal, and conspiracy. More still, it takes place during a period of unrest, towards the latter stages of Egyptian rule. Not only this, but with the Romans knocking on the door, and the threat of Caesar’s legions imminent, civil instability is evident all around. What with the recently dethroned Cleopatra’s forming of a resistance to fight against the current ruler, Ptolemy XIII. The Pharaoh, aspires to expand his empire, yet, are these achievable goals? Or rather, delusions of grandeur for a ruler desperate to seize control over such turbulent times? As a result, a power vacuum emerges, ready to be exploited. The fate of Egypt and that of the world hangs precariously in the balance. 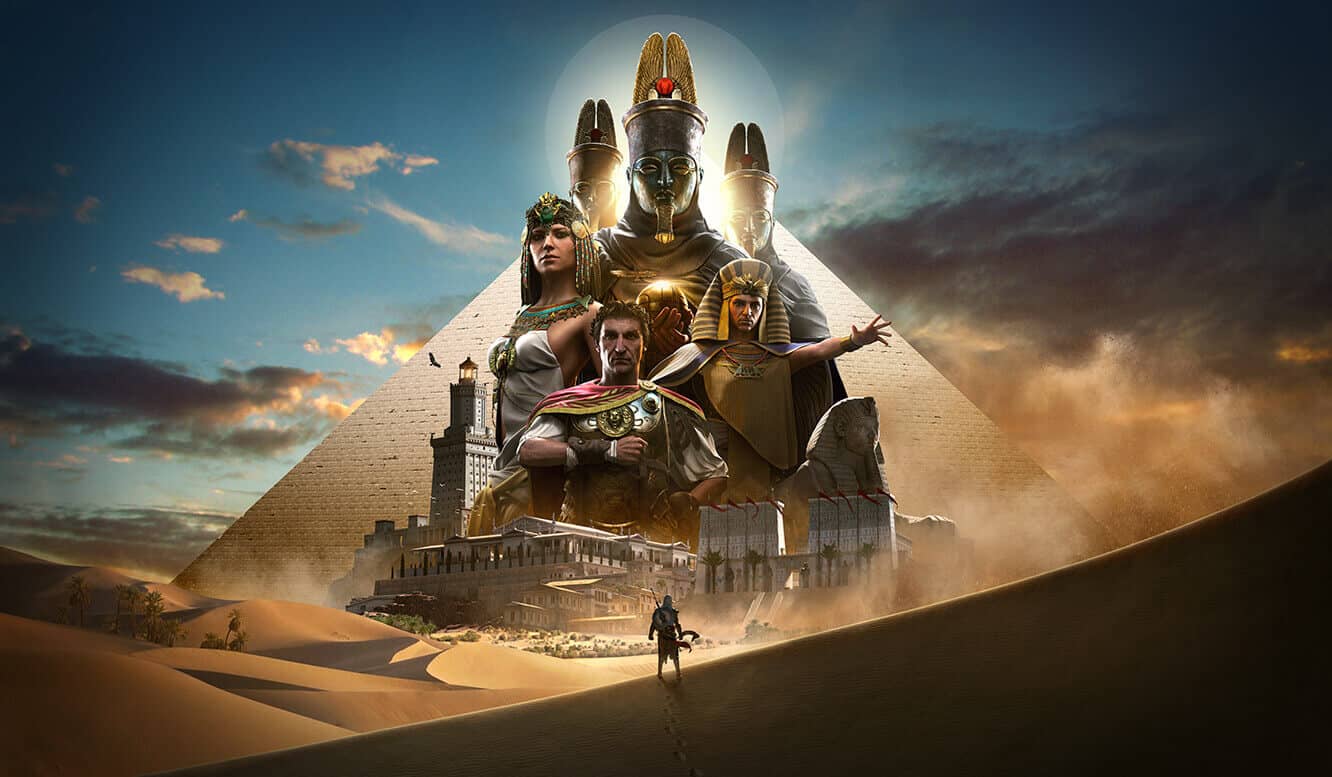 All in all, the story combines strong cinematics with memorable characters. Both of which go some way to praising the beauty of its deep mythos and lore. An enthesis on emotional themes such as love and loss, within a cinematic construct help, create a new level of immersion. The compelling story is full of many beautiful moments, dramatic highs and tear-jerking lows. What’s more, we discover the origin story to the order of Assassin’s, in my opinion, it’s by far and wide the most gripping story in the saga to date.

The gameplay in Assassin’s Creed Origins is one of the main selling points to this game. Firstly, there is just so much to soak in, see and do. For instance, if the story is getting a little heavy, worry not. Players can go off the beaten track to take part in a healthy offering of side quests, mini-games, and challenges. All of which add a slice of variety to proceedings. With tombs to explore, civilians to help, and unruly figures to depose, there is enough content to last a lifetime. Or at least until the next title comes out, which, if true to form, will be some time soon. 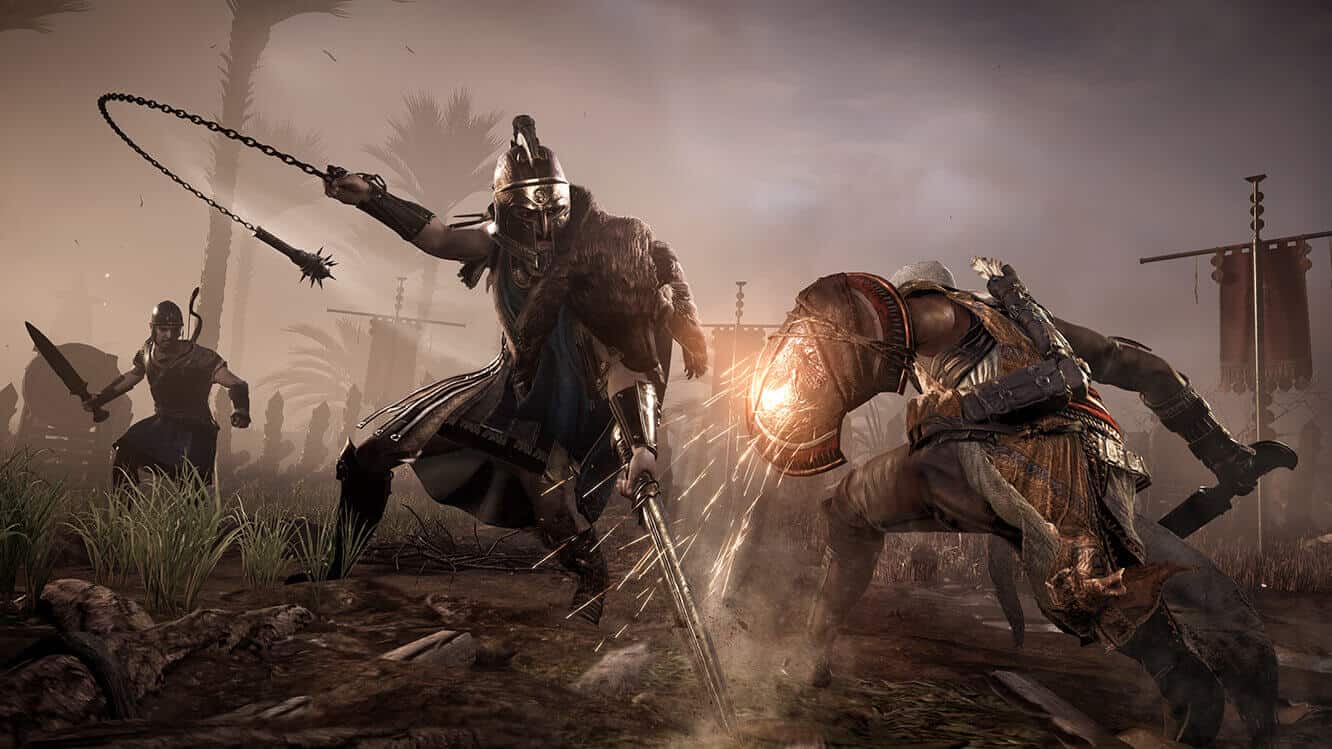 The game also has a leveling system based around XP. Here, players can gain experience points by using the eagle-eye to open new areas on the map, or via the completion of each mission. Also, there is a wide range of species to hunt, which allows the player to obtain skins and pelts to craft items such as ammo bags and unique weapons. Players can traverse the hot, silky sands by either camel or horseback.

Those who enjoy historical context and an immersive open world will love Assassin’s Creed Origins. Better still, the franchise expands on the game-play themes inherent in the previous entries. In doing so, it adds a fresh and intriguing story of origin to this cherished franchise. So then, this is a must play for fans of open-world games with a deep love for a decent story. 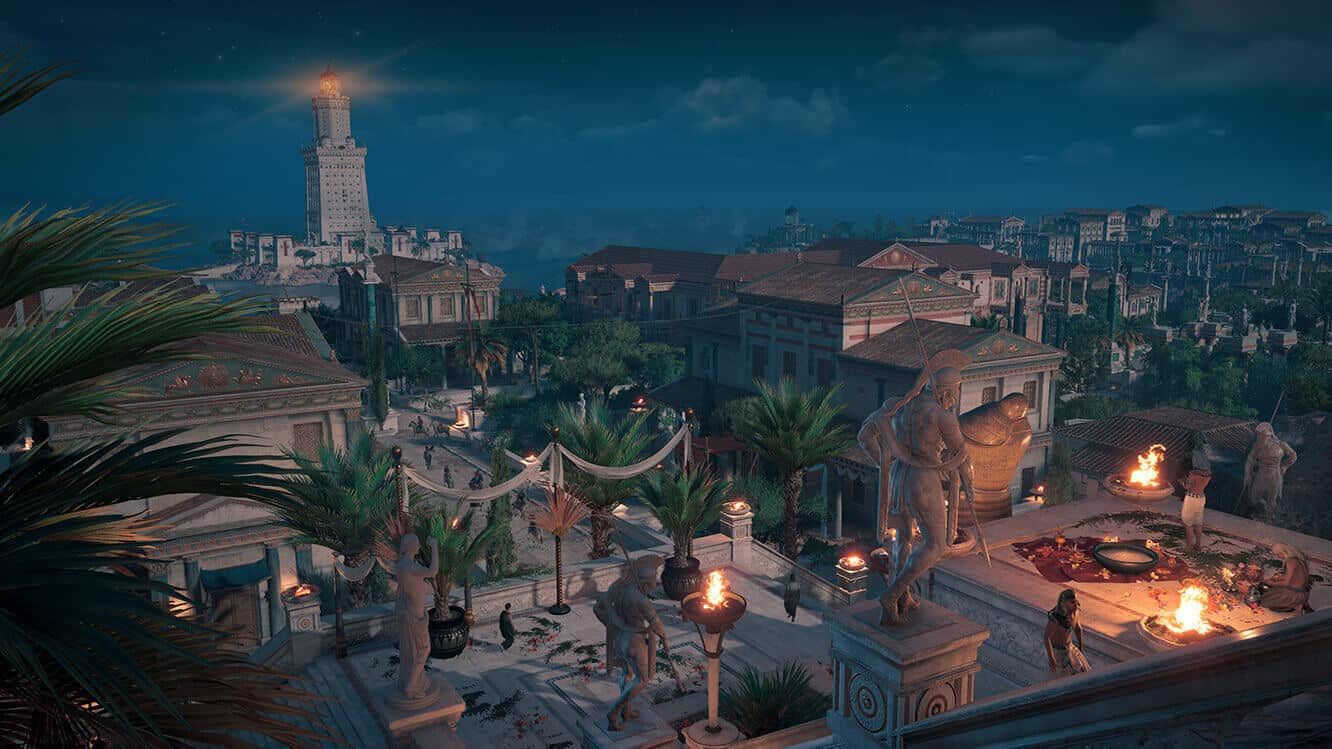 Let us know your take on this open world game in the section below. Is this the best game in the series to date? Where does Assassin’s Creed Origins rank in the list of all-time RPGs’? As always, we can’t wait to hear your thoughts.