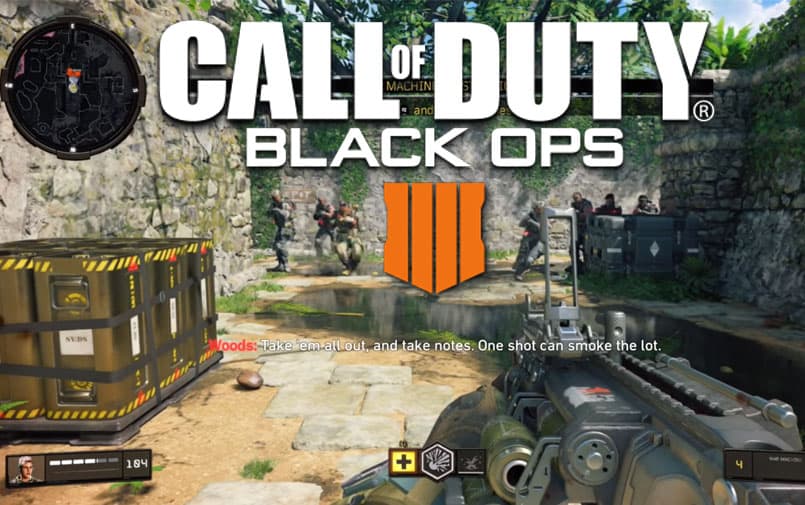 In stark contrast to its predecessor, the latest iteration in the “Black Ops” side-series of games ditches the futuristic theme. Instead, the onus shifts to concentrate on core game modes. No more turbo-jumping and outlandish wall-sprints. Oh no, I hear you cry! With a fleshed-out zombie experience and the inclusion of a rock-solid battle-royale mode, COD: Black Ops 4 makes subtle yet impactful innovations. All of which improve the overall experience.

Regardless, some niggling technical problems and the absence of a story mode prevent this FPS from raising the bar. In truth, the lack of a true story, does sap life out of the game, despite some gameplay tweaks that ultimately fine-tune the experience. There’s nothing monumental at play, but the shooting feels the best it has felt in a long while.

Firstly, let’s focus on the elephant in the room — the lack of a story. Sure, you’ll get some minor narrative cues from specialist HQ, but its bare bones stuff — a cutscene here and their sort of thing. That said, zombie mode shares two different story-arcs, but even those feel lifeless.

Understandably, the loss of a story will upset traditionalists. Truthfully, I felt dejected without a proper story, and for me, the game solely emulates a multiplayer online experience. Unfortunately, a growing trend that many high-profile Publishers are starting to adopt in the modern day.

Besides the superb gunplay COD: Black Ops 4 suffers from a host of technical imperfections and balance problems. All of which permeate into all three of its core game modes. Some of these are bog-standard bugs, slightly jarring at best. But others are more harmful to the game. For instance, awkward spawn scenarios or significant crashes which ruin the immersion. No doubt Treyarch will iron out the kinks over time, but some will expect a fully polished product at release, especially if you consider the price tag and the lack of story thereof.

But it’s not all bad, aside from these apparent setbacks, there are plenty of positives to draw upon in COD: Black Ops 4. That brings us nicely onto Zombies. A mode that, as of now, is benefiting from significant quality-of-life improvements. At least since its last showing. Now, Zombies contains more bite with more modes and maps than ever before.

For example, the all-new Rush mode acts as an exciting deviation forcing players to run the gauntlet, eliminating zombies while banking multipliers as ghouls flood in from all angles. Intense, hugely competitive and highly challenging, this is a game mode that will push your skills to the limits. The result is a refined version of zombies. One that’s competent, with more variety and substance than previous iterations.

Next up we move onto the multiplayer. COD: Black Ops 4 boasts of well-balanced gunplay, while tweaks to its health system, whereby players can patch up on the fly, instills a sense of control, and heightens the importance of tactical play. Unfortunately, COD: Black Ops 4 falls short of greatness, due to its uninspired map designs. A lot the stopping grounds feel like familiar territory. Worse still, many of them are narrow and linear with little verticality. That said, the novelty wears-off early on. Without the tight gunplay and decent progression tree, COD: Black Ops 4 would be in trouble. Thankfully, it excels in this department.

Blackout mode is Treyarch’s answer to the omnipotent battle-royale scene. For the most part, COD: Black Ops 4’s blackout is an excellent twist on the genre, and overall, the mode stands up proudly in comparison with its peers. Out of the three game modes, Blackout is the most level-headed, and the balance it strikes complements the high-octane action to a significant degree. The same format applies, yet the ruthless yet refined nature of the mode makes it fun and frantic. Death will end the game. With that in the end, with so much on the line, firefights take on new meaning, as the stakes rise ever higher.

All in all, COD: Black Ops 4 manages to scrape by relatively unharmed by the lack of a story. Also, it’s refined systems, and solid gunplay creates a proficient shooter even if the maps fail to do justice to the gameplay. There’s nothing ground-breaking on offer, but intuitive tweaks to its core game modes keep the action intense, and the firefights fierce. The way COD is meant to play. Whatever you think of the direction Treyarch is taking the franchise, COD: Black Ops 4 goes back to its roots and re-establishes the core fundamentals. Even with no story in sight, COD: Black Ops 4 is a fun and enjoyable shooter.

That concludes our review of COD: Black Ops 4. What did you think of the game? Are you hurt by the lack of a story? Or does COD’s business model neglect the linear, single-player experience? We’re excited to hear your views. So please get in touch.

Related Topics:COD: Black Ops 4
Up Next