The WoW Shadowlands Alpha is packed full of exciting new changes. World of Warcraft’s latest expansion, set to release sometime in 2020, comes with a major revamp and reimagining of the game on a scale that we haven’t seen since the Cataclysm expansion! Today we’re continuing our deep dive into the class changes in Shadowlands. If you missed it, then here’s part 1. If you’re curious about the other primary changes coming in Shadowlands, then you can check out our piece on the topic.

Today we’re going to look at the changes for Priest, Rogue, Shaman, Warlock, and Warrior. Let’s get started.

The Disc Priest’s new talent Light’s Caress will be a very powerful raid cooldown, adding even more utility to this powerhouse of a class.

Overall, we’re super impressed with the Rogue changes. Poisons are back for all specs! Poisons were such an integral part of being a Rogue that it’s hard to see why they were ever removed. Assassination Rogues will still have stronger Poisons than the Subtlety and Outlaw Rogue specs, of course (as they should!). The new Pick Pocket ability changes sound fun and add even more depth to the Class.

Wow! Some extensive changes here for Shamans. All specs will get access to

Elemental Shamans will no longer use Maelstrom, meaning it’s once again all about mana. This should help streamline the spec. 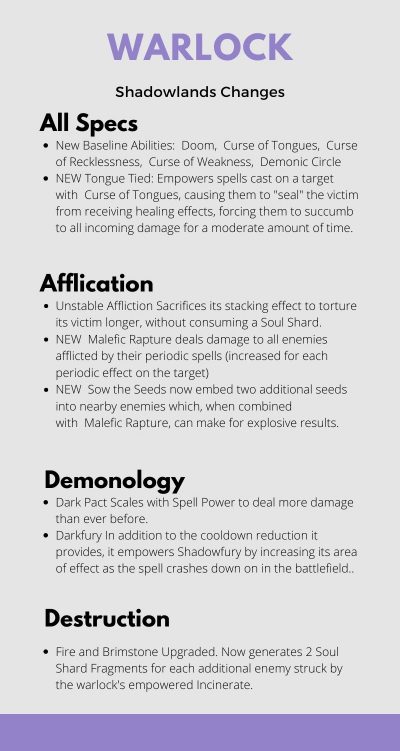 Curses for everyone! All specs will get access to

The new Tongue Tied ability sounds a little overpowered but I guess we’ll have to see how it works when the game goes live.

We’re happy to see Spell Reflection be baselined across all specs, as well as Ignore Pain. Ignore Pain is a Protection Warrior only ability in Battle For Azeroth but will be available for Arms and Fury Warriors in Shadowlands, giving them a boost in survivability.

Remember, we’re still in the Alpha so many of these changes may not be in their final form or could even be removed altogether. We’re already seen that happen in the few short weeks the alpha has been live. In our A New Era for World of Warcraft? The Latest From the WoW Shadowlands Alpha article, we talked about sliders being introduced into the game in the character creation screen. Well, it looks like they have now been removed!