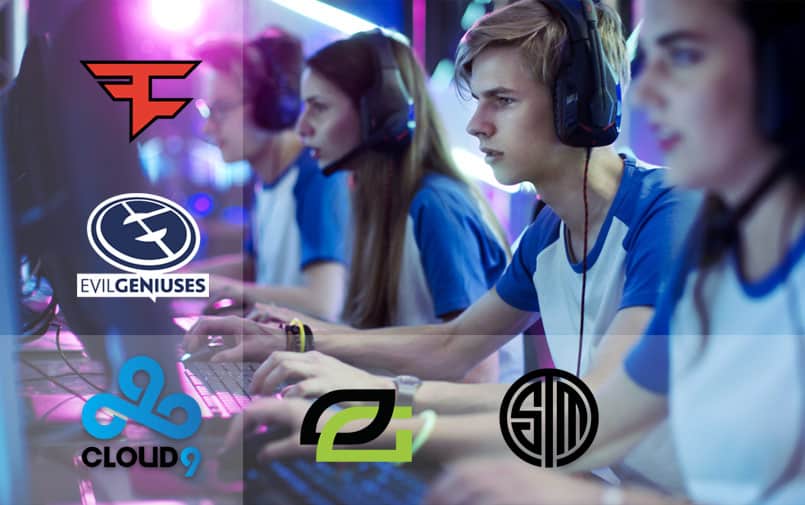 Esports is the rising star of the video games industry. Esports take the form of professional competitive play. Mostly, via video game format. Typically, these involve multiplayer competitions. But teams can submit players from their respective organizations to compete in a solo capacity.

With the rise of online participation via online platforms such as Twitch and Youtube Gaming, Esports has established a professional scene. Full-scale events take place each year across the globe on an annual basis. Today, in our ongoing series of articles, we look at the top esports USA teams.

Previously known as Faze Sniping, Faze Clan is an esports and entertainment organization based in America. Initially, the team comprised of a gaming clan on Youtube set up by seasoned pros: Resistance, Housecat and Clipz in 2010 but expanding following increased populrity levels and sponsorship.

Competing in red and white colors, Faze Clan enters competitive competitions in a range of games. Most notably Call of Duty. However, other games include Counter-strike: Global Offensive, FIFA, Fortnite Battle Royale, Overwatch and PlayerUnknown’s Battlegrounds.

According to the statistician, esportsearnings, Faze Clan is ranked 18th in the world, concerning total prize money. With earnings acquainting to $6,036,589.66.

Evil Geniuses often abbreviated as (EG) is a professional esports organization housed in San Francisco. In truth, the organization started in 1999 and has since represented players in top divisions. Those of which include, Call of Duty, Dota 2, League of Legends, StarCraft II, World of Warcraft, Halo, Rocket League, and Rainbow Six Siege.

In 2015, Evil Geniuses won The International 2015, which amounted to the most lucrative cash sum in the history of esports at the time. Other accolades include the 2018 Call of Duty Championship.

According to the most recent esportearnings forecast, Evil Geniuses are sitting pretty in second place, on the highest overall team rankings. At least currently, and has earnt a total prize sum of $21,200,776.71.

Cloud9 is an esports organization and a household name in the industry. The organization won the inaugural Heroes of the Storm World Championship, gaining the team a healthy fanbase worldwide via social media. With other achievements coming from its Counter-Strike: Global Offensive team. As of now, the organization has teams taking part in many divisions, from League of Legends and Fortnite to Overwatch and Hearthstone: Heroes of Warcraft.

Concerning the current esportsearnings world rankings, cloud 9 as a team, is ranked 13th in terms of prize money, furthermore, it has earnt a total of $8,403,981.81.

Optic gaming, founded in 2006, is a professional esports organization based in America. Sometimes referred to as ‘Green Wall,’ the team competes in Green, Black and White colors. Primarily, Optic gaming has a significant following on social media and began competitive play on the Xbox 360, with Call of Duty Modern Warfare 2. Since then, the organization has branched out to field teams and players in various divisions. For example Overwatch and Fortnite Battle Royale, but also LoL and Counter-Strike Global Offensive.

Team SoloMid is situated in the United States. A fully recognized esports name by all accounts, teamSoloMid first entered the scene in September 2009. Most credited for its League of Legends team which has had massive success in the League of Legends Championship Series. Similarly, Team SoloMid also enters various divisions. For instance, Fortnite, Hearthstone and PlayerUnknown’s Battlegrounds. In addition to Counter-Strike Global Offensive alongside other games.

Based on the current forecast for the highest-ranking teams worldwide by esportsearnings, Team SoloMid is situated 37th, with a total prize haul of $2,911,471.29.

The US has decent representation across the board. Not least within the esports industry. On reflection, Evil Geniuses are the most successful. That said, other organizations represent their respective divisions well. With the esports scene forecasted to explode in the coming years, the playing field may even out over time. As other nations gain the necessary funding and promotional backing.