The World of Warcraft Shadowlands Alpha has been live for a few weeks now and we’ve been following closely as a select group of lucky players get to explore the afterlife themed expansion. Shadowlands isn’t short of major changes that promise to shake up the game for the better! Today we’re going to be looking at the class changes as they stand in the in Shadowlands Alpha right now. Let’s take a look.

Since the Warlord of Draenor expansion, Activision Blizzard has been focusing on class pruning in an attempt to strengthen class specialization identity. It’s not a bad idea in theory. The game has come a long way since Vanilla WoW where players could create elaborate hybrid specializations.

Many players miss the old way of spending talent points across all specializations so they could experience every element of their class. However, it didn’t really work like this in practice. Sure, back in Vanilla to Wrath of The Lich King you could spend your talent points anywhere you wanted – but nobody did. Well, you didn’t if you wanted to be competitive at least. What resulted was cookie-cutter specs that players would copy from a Wowhead guide.

To combat this issue Blizzard locked down specs and boxed players into choosing the specialization that fits their playstyle. They wanted to strengthen class identity and balance the WoW classes. Frost Mages should feel like masters of ice magic. They are their most impressive when freezing targets and shattering them with lethal ice abilities. They shouldn’t have Fire Blast (a Fire Mage ability). Similarly, a Fire Mage shouldn’t have Cone of Cold (a Frost Mage Ability).

It’s easy to see why Blizzard went in this direction. They wanted players to feel attached to their spec and for every spec to have their own utility in Raids, Dungeons, and PvP. However, in reality, players felt it made the specializations feel one dimensional and boring. Blizzard kept removing abilities, locking them away, or watering them down. Put simply, removing the fun parts of your class doesn’t make your class more fun – Who’d have thought? Players have been complaining about over-pruning for several years and it finally looks like Blizzard is listening. World of Warcraft Game Director, Ion Hazzikostas, confessed that Blizzard went too far with pruning.

There is another slightly more controversial reason why Blizzard focused so heavily on pruning, although it’s just speculation. There have been rumors that Blizzard was thinking of releasing a console version of WoW so that PS4, Nintendo Switch, and XBOX enthusiasts could finally explore Azeroth from the comfort of their sofa. It wouldn’t be the first time an MMORPG has ported over to console successfully, Final Fantasy XIV did it on PS4. For WoW to move to console, abilities would have to be axed and simplified to make it playable on a controller. Blizzard has never confirmed nor denied this rumor but many fans thought this is what all the over-pruning was in preparation for.

Luckily, Blizzard seems to have reversed this decision with Shadowlands!

Here are the new changes for the Death Knight class – the former champions of the Lich King who use brute force and dark magic to defeat their enemies. DK’s are getting some class-wide abilities as well as welcome additions for Frost, Unholy, and Blood specializations.

The introduction of 2H weapons for Frost DK’s will make a lot of players happy. Why did it take Blizzard so long?

Unholy DK’s can look forward to a more pet-focused spec that will have their pet’s pumping out high damage. Another good addition.

Here are the changes for the Demon Hunter class – the second hero class in the game! 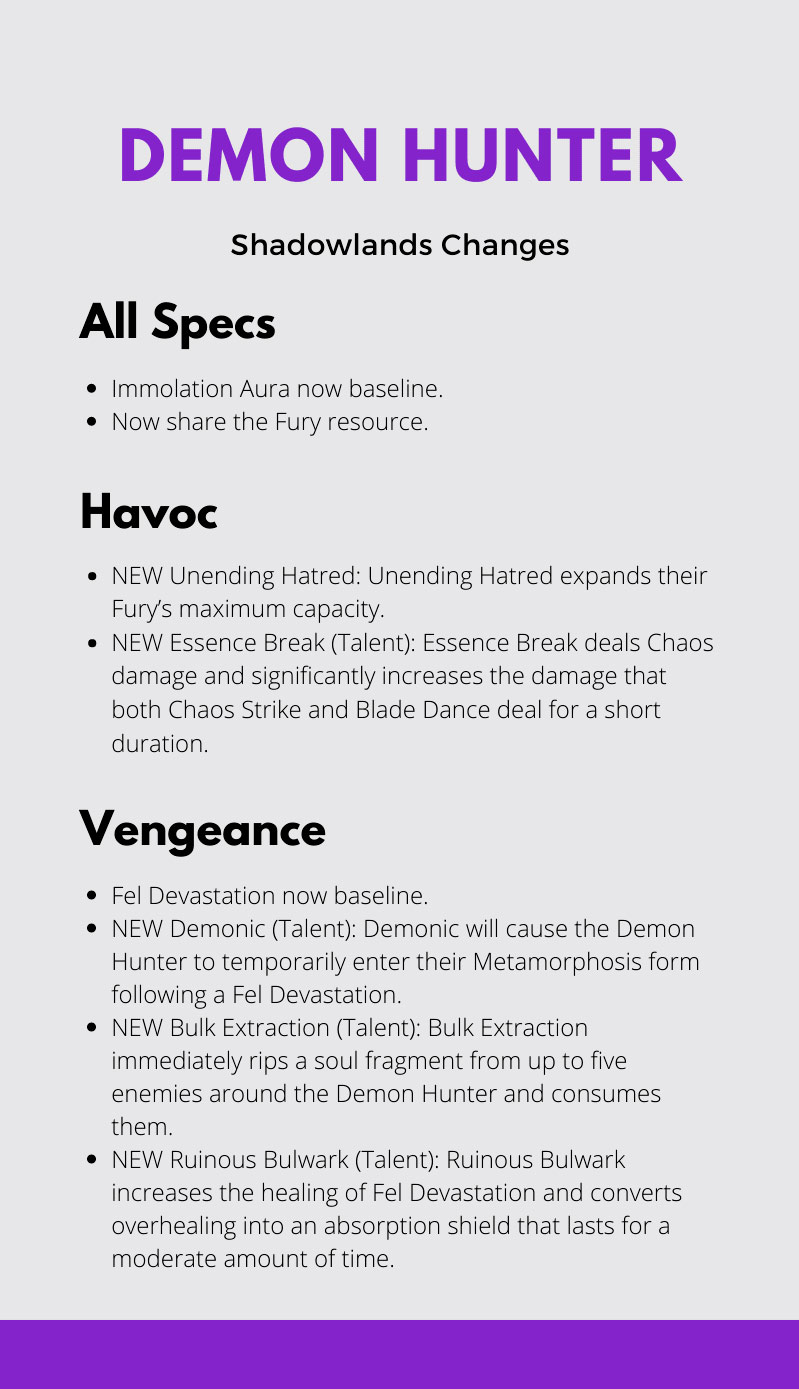 Immolation Aura being baselined is going to free up a talent slot and give players more freedom to tweak their spec.

Havoc DH’s will also have a higher Fury cap and more room for resource pooling.

Overall the Demon Hunter changes are relatively small but could still significantly impact how the class is played.

Lots of abilities are getting baselined for Druids!

Notably, Affinity talents will now grant an extra ability for each spec.

We’re excited about the return of Heart of the Wild. This high skill cap ability was awesome in Mists of Pandaria!

Overall great changes for the Druid class. Druids will once again feel like a true hybrid class by being able to tap into more class-wide abilities. These updates have huge implications for class fantasy!

Here are the Shadowlands class changes for Beast Mastery, Survival, and Marksmanship Hunters!

There are some solid changes here but we would have liked to see more changes to the Survival spec. Survival Hunter specialization has always struggled thematically. They are the Melee Hunter spec and Blizzard has struggled to give them a strong spec identity while avoiding making them too rogue-like. We were hoping that Flanking Strike would be baselined – Is there still time, Blizz?

Solid changes here! The increase in class-wide spells will make mages feel more like mages, rather than a one-trick-pony caster.

Here are the Shadowlands class changes for Brewmaster, Mistweaver, and Windwalker Monks!

Wow – we have a change buffet here! In particular, the changes to Brewmaster spec look promising. Monks are one of the least popular and most underplayed classes in World of Warcraft so maybe Blizzard is trying to inspire more players to switch to Monk with these changes.

The holy knight and second most popular class in the game! Here are the changes for Holy, Protection, and Retribution Paladins!

In part 2 we look at Priest, Rogue, Shaman, Warlock, and Warrior!