Some major changes are coming to the world’s most well-known MMORPG! Could this be a new era for World of Warcraft? Here’s the latest news from the WoW Shadowlands Alpha testing.

Before we delve into the exciting changes coming in Shadowlands, we’re going to take a deep dive into the history of WoW and factors driving the major changes we’re seeing in the new expansion. If you’re just here to read about the latest from the Shadowlands Alpha, then feel free to jump straight to that section.

Why WoW Needs to Change

For many gamers, WoW is the game they think when someone says “MMORPG”. However, WoW wasn’t the first MMO. It wasn’t even the second or third MMO. In fact, the MMOs that pre-date WoW had a huge influence on the development of the game. Many early players of WoW were fans of the game EverQuest.

EverQuest had a passionate community of MMO enthusiasts ready to jump into a new MMO, and WoW snapped them up. However, WoW wouldn’t have become as popular as it did by just poaching fans of the MMO genre. WoW managed to build on the genre and succeed in the places that EverQuest failed.

We’re not here to throw hate at EverQuest. In many ways, EverQuest was a truly excellent game that ignited a passion for MMOs and paved the way for games that came after it. It was the first commercially successful 3D MMO. However, it wasn’t without its issues. Here are the reasons WoW became so much more popular than EverQuest.

WoW was just a more accessible game. New players could get to grips with the game without facing steep punishments for messing up. Both games were addicting, sure, but in different ways. EQ was even nicknamed “EverCrack” at one point. When a young Swedish boy collapsed and started experiencing convulsions after playing WoW for 24 hours non-stop, WoW was called the “cocaine of the computer games world”.

Where they differed was that players felt they HAD NO CHOICE but to carry on playing EverQuest. They weren’t motivated by the sheer joy to gearing out their character and progressing to the next level. Instead, they were trying to recoup their losses. Why stop and eat when you just died? Is mom’s spaghetti really worth losing all your gear?

It might sound crazy to be that obsessed with a game that it takes over your life. But EverQuest was actually tapping into a very real element of human psychology: we hate to lose more than we love to win!

WoW launched in November 2004 and sold a whopping 200,000 copies on their first day. By the time 2005 rolled around, WoW had over 1 million paying subscribers. By contrast, the latest edition of EverQuest, EverQuest 2, peaked at 300,000 subscribers. It was time for EverQuest to hand over their crown and for WoW to become the king of MMOs.

The subscriber count started to decline during the 3rd expansion, Cataclysm. This decline continued throughout Cataclysm and the subsequent expansion, Mists of Pandaria, before spiking again briefly with the launch of Warlords of Draenor in 2015. This was also the year that Blizzard stopped reporting their subscriber numbers, presumably because they were no longer something to brag about.

For years fans of the original game were asking Blizzard to make Classic WoW servers. The answer was always the same – a firm “no”. At BlizzCon 2013, then Vice President of World of Warcraft, J. Allen Brack took this one step further. When one fan asked, “Have you ever thought about adding servers for previous expansions as they were then?”

Luckily for fans, Blizzard had a change of heart. On August 26, 2019, Classic WoW launched and was an immediate success. Over 1 million people watched the launch on Twitch, and by the end of the first week, 47.1 million hours of Classic WoW had been watched on the platform.

Brack, now President of Blizzard, has recently revealed that WoW’s subscriber count has doubled since the release of Classic World of Warcraft.

Of course, we don’t know the exact number of WoW subscribers since Blizzard stopped reporting them 5 years ago, but it was estimated to be between 2M and 4M just after the launch of the last expansion, Battle For Azeroth. With Classic providing such a huge jump in subscriber count, it’s fair to assume that Classic has been a major factor in the changes Blizzard are implementing in Shadowlands.

The character creation screen is getting a major overhaul.

This is what it currently looks like in BFA: 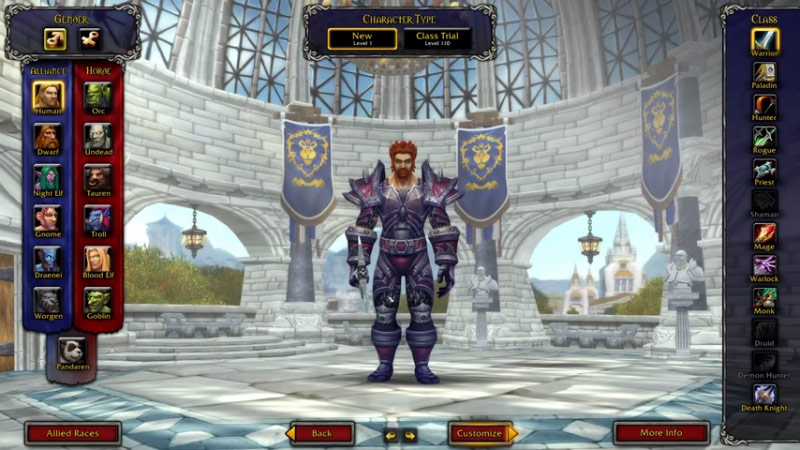 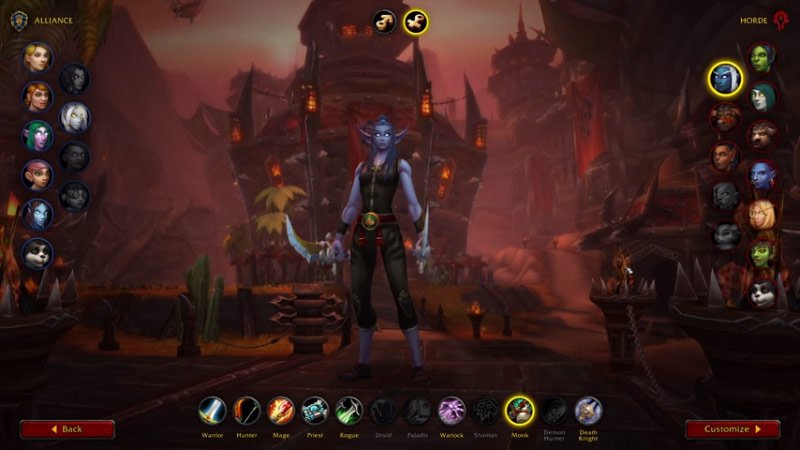 It might not be the most drastic change in terms of how you play the game, but it’s significant nonetheless. The new UI is cleaner and more modern, even if it looks a little less “World of Warcraft”. Notably, the Horde and Alliance factions are now placed on the opposite sites of the screen again which reinforces their everlasting feud.

There has been speculation in the past that Blizzard would do away with having two warring factions and unite the Horde and Alliance. This change seems to suggest this isn’t likely any time soon.

Other Changes to Character Creation 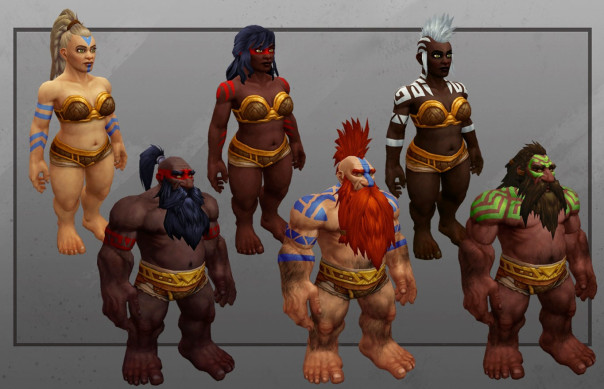 Throughout the expansions, Blizzard has made significant changes to classes, and Shadowlands is no different. The issue with tweaking classes is that if you go too far, they can lose their class identity. Blizzard has been accused of doing this in the past. They add some abilities, they remove some abilities. In recent expansions, they’ve been focused on removing abilities or “pruning”.

Some classes have been over-pruned to the point where they barely resemble the class they once were. Well, we have some good news! Shadowlands is the expansion of un-pruning. Blizzard has assured fans that Classes and Specs will have a strong identity in Shadowlands, and un-pruning is a huge part of this. It’s a massive topic, so we’re going to cover the class changes in more detail in another article. Watch out!

Level Squish – What It Means for You!

Max level will now be level 60! That’s right, Blizzard are squishing the levels from 120 to 60. The Shadowlands expansion will run from level 50 to 60, so if you’re currently max level in BFA, expect to be squished level 50 when the game goes live. The leveling will look like this:

So what about ground mounts and flying mounts? Blizzard aren’t going to make us wait until level 40 for a mount like in Classic WoW, are they? No, luckily, they’re not.

Exile’s Reach is a new starting area that new players will be forced into. Existing players leveling alts can opt into Exile’s Reach or simply choose their favorite expansion. Exile’s Reach runs from level 1 to 10 and essentially trains new players how the game mechanics work in WoW, get’s them familiar with their core spells and abilities, and get’s them a mount at level 10.

Shadowlands is a mysterious afterlife realm that spans the WoW universe. Mortals in the game have something called Anima, a soul essence that passes on to the Shadowlands. Great souls, whether they are good or evil, have a lot of Anima. Humble souls who lived a modest life have less Anima. Put simply, Garrosh would have a metric ton of Anima (despite being morally questionable), whereas a simple farmer would have very little.

When a mortal dies, they are judged by a spirit healer and cast out to the Shadowlands. The soul will arrive in the central city of Oribos where they await their fate. Every decision the soul has ever made is weighed up by the Arbiter and used to determine which of the Shadowland’s covenant is now their home.

When players reach level 60 and have completed the four new zones, they now have to pick their covenant. The zones serve as a way to get to know each covenant. Unfortunately, players with Alpha access don’t currently have access to the covenants and new zones so we can’t give you any new information. But here’s a quick recap of the zones and covenants. 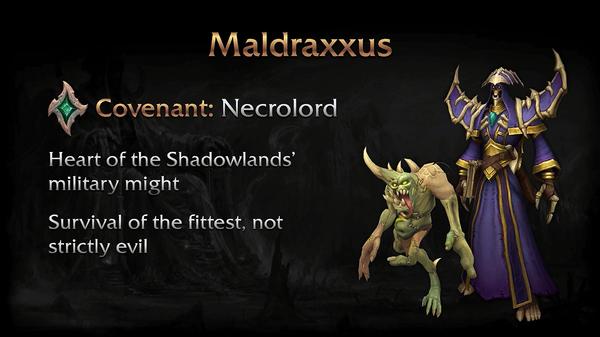 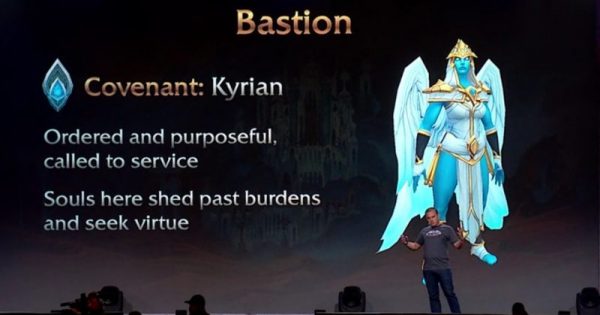 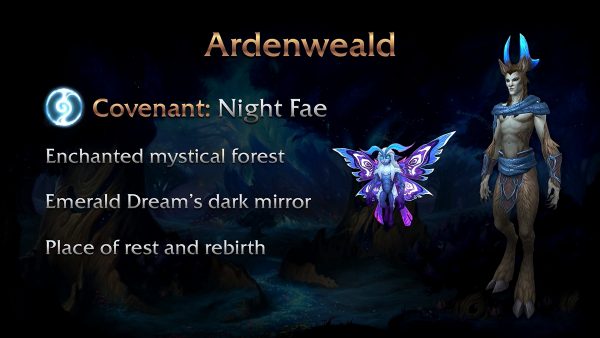 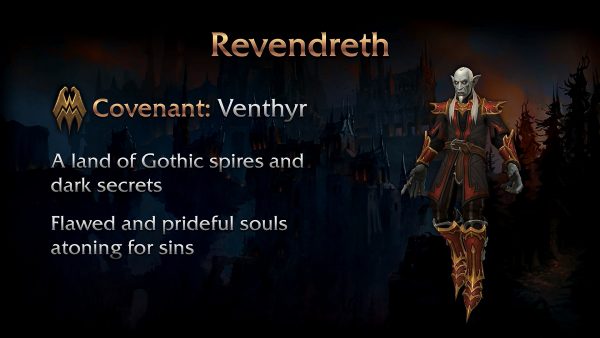 Check back soon for more World of Warcraft news!

Related Topics:World of Warcraft
Up Next