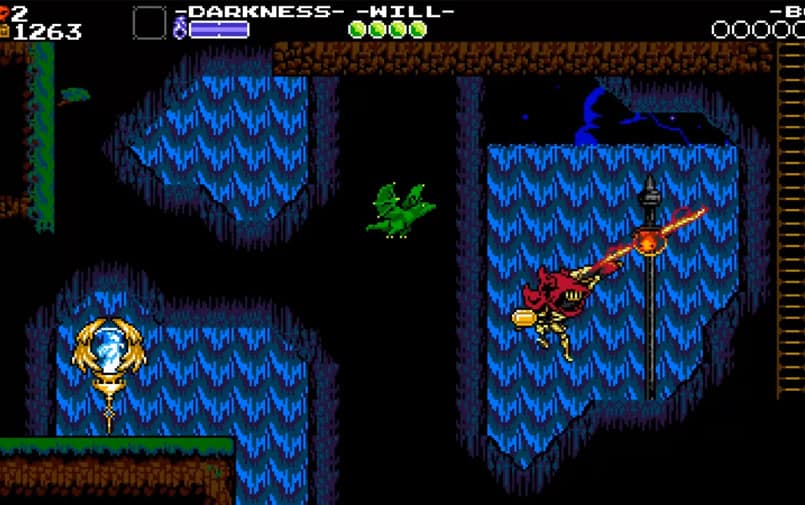 Yacht Club Games released Shovel Knight in 2014 on the PC following a successful Kickstarter campaign. This 2D side scroller platformer had since been released across consoles, with the Switch being the latest contender. With two more campaigns released and another in the pipeline keep this game steadily in the spotlight over the last few years. It’s also managed to sweep a few awards including Best Independent Game and Best Platformer. So let’s jump in and take a look at Shovel Knight.

Shovel Knight is formatted like a classic NES game — you’re a hero, the great Shovel Knight, who have lost their companion, Sheild Knight. She’s been taken over by a cursed amulet. Because of this, Shovel Knight has left his adventuring ways. Soon, a villain known as the Enchantress and her Order of No Quarter have filled the void left by the hero. While you may have a guess at where this plot is going, I’m still not going to spoil any more of the story for you. I think that it’s a fun and exciting twist to the classic Nintendo hero genre.

This 2D platformer is no joke. Based on the nostalgic visuals and gameplay style, you might be tempted to think that this game will let you off easy. It won’t. There were many nights that I spent playing the same level what seemed like a hundred time. When you jump, your forward momentum sometimes it’s what you expect it to be — like if you picked up a sock full of rocks and tried to toss it in a hole. It’ll take a little practice to get it down just right. Once you do, though, you’ll start whizzing through the levels with less difficulty.

As the Shovel Knight, you have two primary melee attacks: a downward thrust in the shovel attack and a jumping attack that allows you to increase momentum while jumping on enemies. You’ll have the option later on in the game to purchase relics from a salesman named Chester. You’ll get from him long-ranged magic attacks and a limited invisibility shield, respectively.

Yacht Club did a fantastic job with the graphics of the game. Both the foreground and background are appropriately oriented to match not only the recalled aesthetic of the game but have brighter, more vivid colors and far more exaggerated character design. The music, for me, helps to bring it all together. It’s addicting and instantly recognizable once you’ve spent any time play the game. It has a jaunty, bell-like feel that immediately reminds me of Castlevania, without emulating it completely.

For me, I’ve played through the main game twice. The replayability is exceptionally high, as you can create inherent difficulty spikes. If getting those sweet, sweet achievements is something that compels you to play the game, you can destroy all the checkpoints, play without obtaining a single relic, and beat the game without dying. (I haven’t managed to hit any of these achievements, by the way. I’m still working on it.) Not only that, but if you do decide to jump in and get the DLC packs, each builds on the story before it and while getting increasingly more wacky, but no less impressive. With its distinctly nostalgic feel, I like to pull it out when my older systems just won’t feed the flames.

Shovel Knight has become such a beloved character in his own right that he’s been included in games like Cook, Serve, Delicious: Battle Kitchen and Brawlhalla. With the new DLC in the pipeline after being delayed, Shovel Knight is bound to be back in the spotlight sooner rather than later. If you enjoy platformers in any way, this game should definitely be at the top of your list.