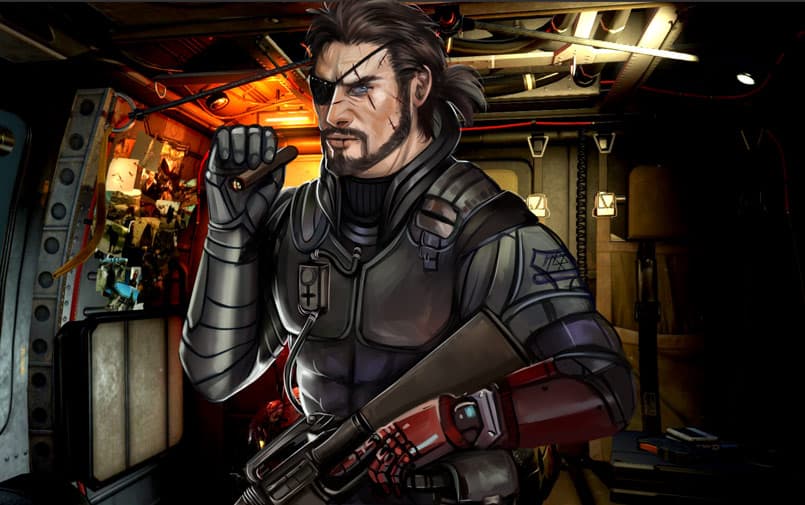 Big Boss may have taken on the mantel from series protagonist Solid Snake late into proceedings. However, it wasn’t long before the legendary soldier made his indelible mark on the Metal Gear Solid franchise. And of course, the video games industry, altogether.

After all, the combat boots of Solid Snake are a focal role to fill. Once a profound whisper in the wind, much like the ethereal Sephiroth in FF7, at least initially, it was only a matter of time until Big Boss wrestled the spotlight away from his genetically reproduced son. Eventually, taking center stage as the iconic series protagonist, we see today. And, although the MGS series may be all but dead and buried since Hideo Kojima’s seemingly divisive split with Konami. In my eyes, the legend lives on.

In truth, it’s yet to be seen whether Big Boss will return to the field. But if not, his place in video game folklore is, all but cemented. Ever since Metal Gear first released in 1987, Big Boss has played a pivotal role in events. Although Solid Snake; a rookie special forces operative takes the lead on his first mission, to dispose of a lethal nuclear weapon, Big Boss acts as snakes guiding compass. Thus, helping him navigate the otherwise impenetrable Outer Heaven, created by a mercenary of legendary stature.

As the plot thickens, Snake must not only contend with a walking battle tank. But also, Big Boss, as the FOXHOUND commander turns on his latest recruit. Unsurprisingly then, Big Boss is prevalent at the genesis of MGS and concludes the series with Phantom Pain. Always, never too far from the scene. Either by physical means. Or, via a characters fleeting, and perhaps fanciful recollection of the past.

Snake may have snatched the spoils of war first time around, but Big Boss vowed to return. Now head of a military organization called Zanzibarland, Big Boss once again takes matters into his own hands, by holding the world to ransom over oil and nuclear warheads. And of course, Metal Gear (It can’t be!) After a hand-to-hand, dust-up with Grey Fox in a minefield, Snake once again, confronts Big Boss. Soon after, Snake wins the day, improvising with an aerosol can to overcome his arc-enemy once more.

For me, despite Snake prevailing as a devout man hellbent on the mission objective, it was Big Boss that captivated me most. Purely because of his independent thinking and contrasting ideologies. Of course, it wasn’t until MGS though, on the original PlayStation, that I began to appreciate Big Boss fully. In Metal Gear Solid, we discover that twins Solid and Liquid Snake are both genetic recreations of Big Boss. And therefore, are artificial siblings made with the sole purpose of emulation — all in the hopes of mass-producing the ultimate soldier. Reborn for a new age of warfare. Surely then, reason alone to respect the shoulders of giants gone before.

Although Metal Gear Solid: Sons of Liberty, very much follows in the footsteps of MGS, Snake Eater solidifies Big Boss or Naked Snake, as a series icon, by retelling his origin story. Here, we get hands-on with the legend. Set amidst the toxic backdrop of the Cold War, Naked Snake must put to rest a nuclear threat, and dispatch of his mentor to prevent the world from plunging into chaos.

After losing an eye during a brutal torture scene, and getting tossed overboard like a human ragdoll, during a close quarters tussle, breaking many a bone, Snake valiantly battles on to defeat his ex-teacher. And thus, in the process, achieves an even bigger title than the Boss; Big Boss. From a visual standpoint, Big Boss is striking in appearance. Mostly, though, the eye-patch is what sets him apart. Those who have seen the movie Escape from LA will be aware of the visual likeness to Kurt Russel. Besides, his name is Pliskin, after all.

Later on, in the Phantom Pain, Big Boss has a bionic arm. And, long ponytail hair with a scarred complexion. But emotionally, Big Boss differs from Snake in many respects. While Solid Snake is brash and often overbearing, Big Boss is cool, calm and collected. And most importantly, very rarely loses the control of his temperament. However, Solid Snake does gradually become more Boss-like as his timeline draws to a close.

I guess I’m just intrigued by Big Boss more, as somewhat of an enigma. A man, going against the grain and fighting for his beliefs, as opposed to a grunt, blindly following orders. I suppose that’s why I loved the idea of Snake and Otacon forming Philanthropy after the events of Shadow Moses. Following along his father’s path, but for a just cause. Anyway, I digress.

Nevertheless, those are my thoughts on Big Boss. And why he will always be a legend in my eyes. We want to know. Who is your most legendary game character in the industry? Additionally, what makes them extremely special? As always, your contributions matter. So please, feel free to air your top-picks below.

For more opinion pieces, visit us at LatestGamePlay, daily.