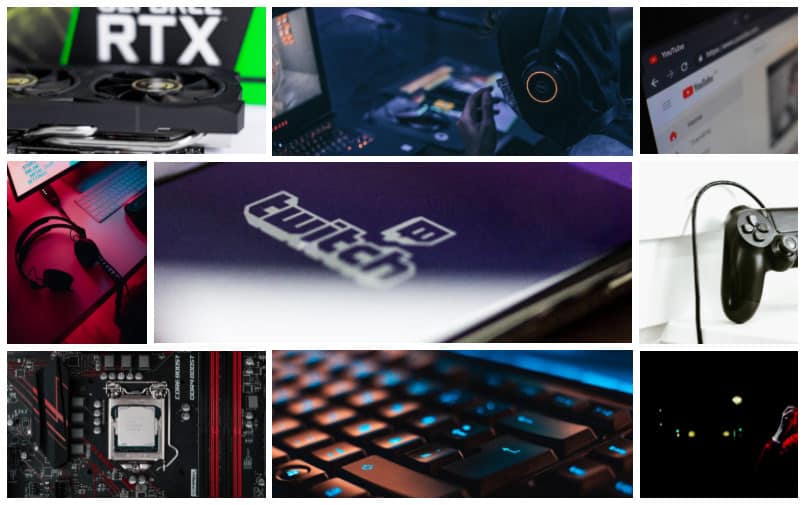 Ok, so you’ve decided you want to be a Twitch content creator and start streaming your gameplay. You’ve probably picked your niche, decided on a schedule, and maybe even planned your intros and outros, but do you have the right gear to pull it off?

Twitch streaming isn’t just about hitting record and rambling your way through a game, you need to set yourself apart and connect with your audience. Twitch viewers have come to expect a certain quality in the content they watch which means you’re going to need decent hardware and software to produce high-quality content. Below you can see our tips and tricks for the best hardware and software setup for Twitch streaming to start you on your journey to Twitch stardom.

This may seem like an obvious one, but it’s important to discuss exactly what this means. Technology develops at a rapid pace and you can be sure that months after you get the latest gear, there’ll be something else on the market that’s even more powerful. You don’t need the most powerful machine around to be a successful Twitch streamer, but you do need to hit some key specs, and if you have a laptop or PC that falls short, you may need to upgrade.

Twitch recommends having an Intel Core i5-4670 processor (or its AMD equivalent), at minimum, having 8GB of RAM as a minimum, and an operating system of Windows 7 or above. If you don’t meet these recommendations, your content quality is likely to suffer.

Streaming on a laptop is generally considered blasphemous on gaming forums and subreddits, but it really depends on what you plan to stream. When it comes to more casual games, a decent laptop will be just fine.

When streaming or recording your gameplay, having the best RAM for gaming is a critical  component to the rest of your setup, it will have an impact on everything from your CPU to your graphics.

That’s the reason our recommendation is not only to get the best DDR4  RAM  and also the fastest. For the best seamless experience, we recommend get the RAM of least 2,666MHz.

If you’re planning to stream your gameplay from your PS4, Xbox One, Switch, or from a separate computer from the one you’re gaming on, then you’re going to need a capture card. Capture cards capture your gaming data, such as video and audio via a HDMI connection.

You’ll want to invest in streaming software that will make your videos look polished and professional. There are several good options here for both free and paid software. Let us take a look.

OBS Studio is one of the most popular streaming software options out there and is often dubbed as “the most powerful screen recorder”. The software is free and open source and gets regular updates from the developers. OBS Studio supports YouTuve, Livecoding.tv, Twitch and some other big names.

This software is more focused towards recording gameplay rather than streaming it, but non the less it’s free, easy to use, sports a great interface, and supports Twitch, YouTube Live, and Facebook Live. The drawback of this software is that it used GPU to record which make affect your gaming performance.

XSplit has a free and premium version of its game broadcasting software, with the paid version offering more features. XSplit has more features than OBS if using the paid version, which makes it an attractive option for more seasoned Twitch streamers. You can edit videos on the go with XSplit and it supports direct uploading. The price tag is affordable at around $9 a month for a 3-month subscription or $5 a month if you pick the yearly option.

You can get away with using a decent gaming headset, however, if you want to take your audio quality to the next level, you’ll need a dedicated microphone. There are plenty of different microphones on the market, and they usualy fall into three categories:

Cardioid mics capture the sound directly in front of the mic; bidirectional captures the sound in front of the mic and behind the mic; omnidirectional captures the audio from every direction. For Twitch streaming you’ll want a cardioid mic since you’ll likely be the only one talking into the mic and you’ll be in a fixed position. Let’s take a look at the best USB mics for Twitch streaming.

SEE IT ON AMAZON
This is one of the best quality microphones in this price range. It’s easy to use and the audio quality is high without the need for additional 3rd party equipment to help it along the way. The Rode NT sports a stylish look that resembles the look of a studio microphone. When compared to the Blue Yeti microphone, a popular mic in this category, it’s generally considered to be higher quality.

SEE IT ON AMAZON
This is a highly popular microphone that is highly versatile, making it the “microphone for everyone”. This is because you can choose your pattern selection, whether you want cardioid, bidirectional or omnidirectional audio capture.The Blue Yeti is perfect if you want to stream but also can see yourself conducting interviews with other people or recording music where audio is coming from several directions. The mic can also be a little tricky to set up and tune to your preferences, requiring a little trial and error to get it right.

This webcam has a classy design, 1080p video quality, and supports background removal which makes it great for Twitch streamers and YouTubers. The webcam will automatically adjust the light in dim environments to provide a high-quality picture.

SEE IT ON AMAZON!

If you’re looking for a webcam at a reduced price, then this is the webcam for you. This webcam sports True 720p HD video up to 30 fps. It’s extremely easy to set up and basically ready to go as soon as its plugged in and wired up. It’s very cheap so it’s a great choice if you want to test out Twitch streaming but aren’t sure you want to fully commit just yet.